This principle of choice reduction applies not only to games but to matters of life and death, ranging from addiction to political debauchery. But first, back to chess.

Before I provide an example, let me note that this tactical thinking is exactly not how this novice plays: I like to find a creative move that may or may not work out, but (1) hope for the best, (2) move, and (3) hold my breath. Luck and reliance on my opponent having a moment of distraction are key to this approach.

One of my favorite puzzles involves sacrificing one’s queen in order to get the opponent’s bishop and queen in the end. From “lichess.org” (go ahead and try this one in advance, if you want), we have the following sequence.

An impulsive move would be for white (that’s us!) to move the knight to take the black pawn. This shortsighted move puts the black queen in jeopardy (not a bad idea), but with a material gain of only 1 point for the captured pawn.[2] You can imagine the move involved, using the following as the starting place: 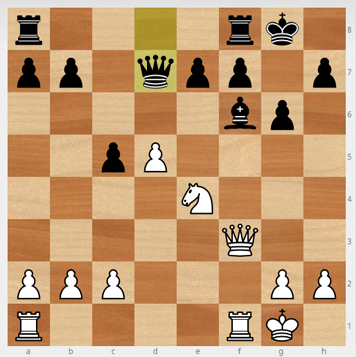 The better move is to sacrifice the white queen (-9 points) by taking the black bishop (3 points), temporarily giving the opponent a relative gain of 6 points: 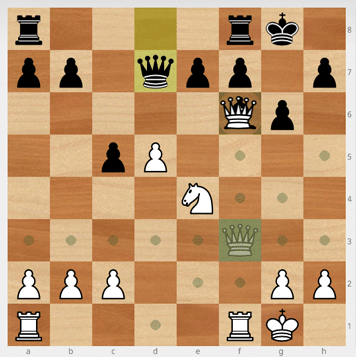 However, once the black pawn takes the white queen… 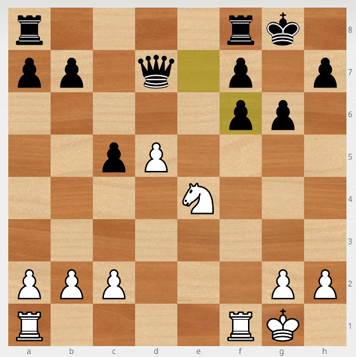 …the white knight can take the black pawn, causing a black king-queen split (at which point black is up only 5 points, having lost a pawn): 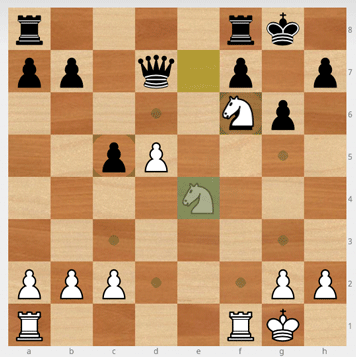 Because the king must move (or resign), the black queen cannot move, with the result the white knight takes the black queen (9 points), putting white 4 points into the lead: 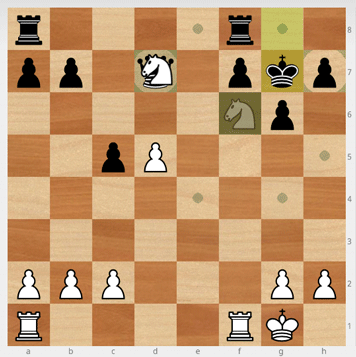 Black hardly had a say in any of this, once white sacrificed the queen.[3]

While this section could be book length, it will only glance at the tactical nature of the “enemy of our souls” (however you want to define that enemy, whether as a spiritual entity, a psychological mechanism, a political ideology, or a combination).

Doesn’t almost every moral temptation eventually take the form of a king-queen split (a royal fork), where the options are pared down to the point that the worse decision often seems either inevitable or hardly worse (and more pleasurable) than the better decision? On the verge of adultery, the spouse hears, “Take this opportunity before it’s gone,” not, “There might be a dozen better ways to spend the afternoon.”

Take the character of Macbeth for a classic example of temptation. First he is promised by the witches to become Thane of Cawdor and also King of Scotland. That same day he becomes Thane of Cawdor (that’s the queen sacrifice, a seemingly good thing…ridiculously good). From that moment the gears begin to move.

Macbeth, being a man of ambition who just witnessed a prophecy fulfilled, can imagine only one way to become king, and that through regicide. Whenever he falters (that is, whenever the milk of human kindness begins to keep his murderous intent at bay), Lady Macbeth is there to prod him on. If he goes through with the murder of King Duncan he will “be more than what [he was, he would] / Be so much more the man” (Act I, scene 7).

And there we have it in a convoluted way, the royal fork: Macbeth now cannot have his wife (who would be queen) and the existing King Duncan, too. Macbeth must choose, and he chooses to promote his wife.

The chain of events does not stop there. He not only kills the king but feels compelled to kill his friend, Banquo, because the witches also prophesied that Banquo would be the father of kings, an apparent termination to Macbeth’s short-lived kingship.

As each bloody deed engenders another, Macbeth becomes a slave to survival. In his words, he has begun to wade so far into a river of blood that it is as easy to go across as to turn back: “I am in blood / Stepp’d in so far that, should I wade no more, / Returning were as tedious as go o’er” (Act III, scene 4). In this image, only one choice exists: to shed more blood, whether in moving forward or in retreating.

In short, what began as apparently volitional (listening to the witches) and immediately became gratifying (Thane of Cawdor), soon became a series of reactions, each act requiring further deceit to conceal the nature of his enterprise.

It’s a common theme, that every compromise involves further compromise, and every lie leads to another lie. What strikes me, though, is the way destructive thoughts reduce the options so quickly. Depression under the worst circumstances leads, not to the conclusion, “I should figure out a better way to live,” but to the decision that precludes all other decisions: “I should figure out a way to die.”

The majority of Americans probably would say they live in a democracy. As long as they compare American freedoms with those of Saudi Arabia, North Korea, or other such countries, they can maintain that conviction without much trouble.

However, if America is a representative democracy, it’s on the verge of collapse, since the ruling minority are growing increasingly indifferent to the needs of the majority. What used to trouble the lower classes now troubles the middle classes (not that it was ever right in the first place for healthcare and property ownership to be out of any citizen’s reach). When “get out and vote for the lesser of two evils” (if you can discern that difference) is the rallying cry for democratic participation, the democracy no longer functions.

The problem with American democracy was summarized soon after the Civil War, when William M. Tweed said, “I don’t care who does the electing, so long as I get to do the nominating.”[4] The powers behind the powers continue to become a smaller group of wealthy people and organizations, sponsoring a slightly larger group of politicians to comprise the oligarchy that determines who and what Americans can vote for.

This narrowing of choices has been the case long before Donald Trump was elected to “drain the swamp.” The swamp unfortunately has undergone lateral changes that displace various political and economic creatures with another set of unrepresentative creatures.

Others more qualified have critiqued the current administration, which is not my purpose.[5] I’m attacking the lack of choices permeating our democracy, but will nod to one particular circumstance that smacks of non-representative government. President Trump appointed Scott Pruitt as Administrator of the Environmental Protection Agency, knowing full well that prior to the appointment, Mr. Pruitt, as Attorney General of Oklahoma, was involved in a least 14 lawsuits against the EPA, not exactly the person who can wholeheartedly support the conventional meaning of “Protection” in the agency’s name.

The saving grace of Mr. Pruitt’s role in the EPA, to date, has been the role of the courts (suggesting that some balance of power persists, at least for the present). He has chosen to not challenge the EPA’s “endangerment findings” that underpin the Clean Air Act, presumably because they were challenged in the supreme court already (2006), a challenge that resulted in the supreme court’s supporting the statutory authority of the EPA to regulate greenhouse gasses from new motor vehicles. In addition, Mr Pruitt’s attempt to delay a rule against methane leaks in wells was vacated early by the United States Court of Appeals for the District of Columbia Circuit.

Updated later in 2018: One final saving grace of Mr. Pruitt’s role is that, amid ethical scandals, he resigned in July, 2018, approximately on Independence Day.[6]

Awareness and vigilance work wonders for a novice chess player. The problems with addiction, greedy ambition, or depression are trickier and less easily budged. Sometimes, they may take a lifelong dedication to beat. One hopes—I hope—that we find something in ourselves that revolts against being tricked again.

The general solution is to stay on the offensive (which is where the plenitude of choices resides). If you pray, pray early and pray often, same with attending meetings, calling friends, exercising, journalling, being thankful, helping the homeless, or giving to the needy. Whatever the tactics are that you have reason to employ, the strategy must involve making decisions that lead to further decisions. Forcing the hand of the enemy is of course ideal.

Perhaps one of the most common classical passages on the reductive nature of the enemies of our souls lies in what is called “The Lord’s Prayer.” It certainly was a classic when I was in high school: a student leader recited the Lord’s Prayer instead of the Pledge of Allegiance (that he was supposed to be leading) during a school assembly. He did this toward the end of the Vietnam War. It was a stunning moment, even for young students like myself who were not familiar with Lord’s Prayer at the time.

The prayer begins, not with a petition to fix the current political situation of the Roman empire and the Jewish region, but with a request for a new kingdom and a different will than the earthly ones.

[1] One is “lichess.org” and the other is Chess Tempo.

[3] One can imagine that the black pawn could refuse to take the white queen (see the second illustration). This would leave white up 3 points for the bishop, and leave white in good position with a knight and a queen lurking near the black king. (On lichess, an “analysis engine” allows you to see the outcome of a specific move. In this case, black loses, presumably faster than if black had taken the white queen.)

[5] Chris Hedges’ writing has the advantage of critiquing not just the presidency, but the entire system, long before President Trump came to be. See “Democracy in America is a Useful Fiction” (2010) and The Deadly Rule of the Oligarchs (2018) in particular.

[6] One can read about this in Fox News with a prefatory string of laudatory comments from President Trump, or one can read about it in The Washington Post with a much more detailed discussion of the ethics in question.

[7] See definition 2b under “Thayer’s Greek Lexicon” on this page.

For those interested in the full text of Matthew’s version of “The Lord’s Prayer” (King James Version):
Our Father which art in heaven, Hallowed be thy name.
Thy kingdom come, Thy will be done in earth, as it is in heaven.
Give us this day our daily bread.
And forgive us our debts, as we forgive our debtors.
And lead us not into temptation, but deliver us from evil:
For thine is the kingdom, and the power, and the glory, for ever.
Amen.