There’s a big problem with well-known, commercial (i.e. purchasable) audio versions of the Bible. Mobile versions, especially but not exclusively, present the listener with meaningless numbers instead the historical names of the books of the Bible, something analogous to seeing “City001” on a map instead of “New York City.”

The problem is not the actors reading the Bible, such as David Suchet, who got a start in the Royal Shakespeare Company and gained international fame playing Hercule Poirot. The other reader-actor to whom this article refers is Max McLean, nominated for four Audie Awards and well-versed in reading the Bible, having recorded it in its entirety in three English translations.

And it’s not the content, the best parts being better than anything I’ve encountered elsewhere.

Why the Bible Requires Better Navigation than a Novel

The problem is that navigating to the part of the Bible one wishes to listen to is a crap shoot, at best (as this article will demonstrate). The problem is serious and has been a problem for years, making me wonder how much crap (I’m using that in a different sense than previously) people will put up with from tech companies who don’t consult subject matter experts.

I’ll use the word “index” to describe the problem, but by that I am not referring to the index of terms at the back of scholarly works. Instead, in a more general sense, index simply means whatever mechanism an audio recording provides for navigating among sections of the work.

The best way to demonstrate the problem is to point out that the Bible is read unlike almost any other book (except reference books). Unlike most books, few people read the Bible from start to finish. Most read some parts of the Bible many, many times (Psalms, Gospels, Paul’s letters, for examples), while they read other parts rarely, if ever (Leviticus, Jeremiah, and Obadiah, for examples). The person who has purchased an audio version of the Bible usually knows his or her way around the book (or collection of books, in reality), and should be given the navigation needed to get around on the audio version with as much or more convenience than a printed version.

As a point of contrast with the Bible, let’s look at a free electronic version of Charles Dickens’ A Tale of Two Cities. Considering it is free is remarkable, because it is indexed better than these commercial audio Bibles. But even if A Tale were not indexed well, most readers would start at the beginning, listen for some time, pause, later resume, pause, etc., and finally reach the end.

Here’s the indexing of the free LoudLit.org podcast of A Tale of Two Cities performed by Jane Aker on a laptop:

As you can see (if you clicked on the image), the indexing includes, first, the episode number, as one would expect with a podcast. But that is immediately followed by the chapter numbers as assigned by the author (as opposed to a mechanical assignment of file numbers). Also in keeping with how Dickens published the book, the indexing includes the divisions marking the Books (“Book 1,” “Book 2”). All that’s missing are the chapter names, which would be a nice but not necessary addition. With chapter names, one would know that Chapter 15 of Book the Third is “The Footsteps Die Out Forever,” a description that suggests the sad and glorious ending of the novel. But the main point is that in a typical book, chapter titles are not needed by most readers, who would listen to the book in linear fashion (beginning to middle to end)—unlike the Bible which is listened to in a selective fashion (“today, I’d like some Psalms with a side of Ephesians”).

Here’s the view on a mobile device of the same Dickens podcast. The first image shows it’s the same podcast as illustrated in the laptop view above, the second image shows that the book and chapter numbers, again, are clearly marked: 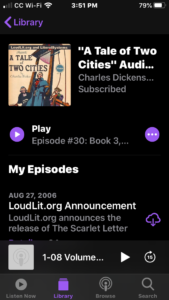 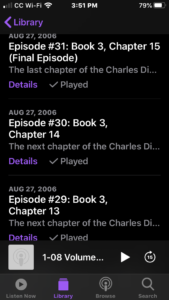 Now onto two popular purchased audio versions of the Bible, which offer the listener less than the free Dickens podcast even though with the Bible need for the correct metadata is much more important.

First, we have The Listener’s Bible, narrated by Max McLean. Happily, on a laptop as viewed in iTunes, the Biblical book names are visible (and this is all I’m asking for on mobile devices). Here they are sorted alphabetically, which is fine; it would be nice if one could sort them according to the order one finds them in the Bible:

However, on a mobile device, the same The Listener’s Bible displays only Chapter numbers. One must remember there are 66 books, each with chapters, totaling 1,189 chapters. So, think of scrolling through 1,189 chapters, hoping to find Chapter 3 of the Gospel of John. Find it, and you, too, will start to believe in miracles! 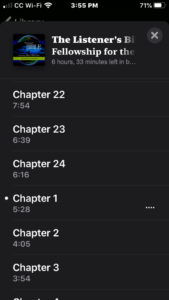 The McLean version has one additional (unnecessary) problem: Chapter 1 of the Gospel of Matthew is not Chapter 1—it is a copyright notice. And this notice throws off the chapter numbering for the entire gospel. Want the final chapter, Chapter 28? Go to Chapter 29.

The worser case (as Hamlet might say) is unfortunately David Suchet’s version (and I doubt he was consulted on the indexing!). Even on a laptop, this is what one sees (in iTunes):

So, we have 13 parts, probably divided fairly evenly mathematically, not theologically or authorially. Now, I know there are 929 chapters in the Old Testament and 260 in the New, so I figure I need to go to the last quarter of the parts (i.e. about 10-13) for the New Testament, and I’m almost correct, although 10 brings in some of the Old Testament. But should life in the digital age be this difficult?

Finally, the mobile version of Suchet’s reading repeats what one sees on a laptop: 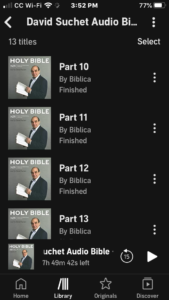 If one looks at the specific track being played, one will get confirmation that, for example, in this case, one is listening to chapter 892, which happens to be a chapter in the Book of Jonah. 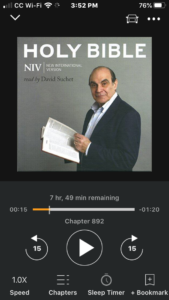 If one wants the story of the giant fish, the repentance of Nineveh, and the worm that made the giant plant whither, one should remember that number! I personally like the story, but if I were throwing someone overboard you can be sure it wouldn’t be Jonah; it would be the organizations who allow consumers to pay ~$40-$55 (Suchet) or (McLean) for such poorly indexed masterpieces. (The links are to Audible but the price range from non-subscription vendors.)

What you’ve read above is not one person’s gripe or pet peeve (whatever those are). It is echoed in the reviews of these audio versions of the Bible. They frequently give the audio product a high rating for the performer and the content, but are disappointed with the poor navigation (or indexing, as I’ve used it). The following reviews are from Amazon (Suchet) and Amazon/Audible (McLean).

The most helpful review of Suchet’s reading provides an index of the New Testament version for readers. Kudos to Dansword—whom I cannot help quoting at length:

dansword
4.0 out of 5 stars Here is a useful index I made for myself…….
Reviewed in the United States on June 7, 2018
Faithful listeners take heart. I think this might help.
Since every chapter stop (all 260 of them!) represents a chapter in the New Testament numbered consecutively, you can easily navigate to any chapter of any book just by referencing the index below and applying basic math.

Here is the basic index I came up with if you would like to copy it:

I admit, the publisher could have included a few simple navigational tools that would have made referencing a particular passage of this version easier, but the job David Suchet does here is absolutely superb! You wouldn’t want to overlook it simply on the basis that it lacks the navigational help that is often included with other audio bibles.

Here’s another review of Suchet’s New Testament recording (so multiply the complaint by 4 if the reviewer had the entire Bible recording):

lagniappegirl
5.0 out of 5 stars Wonderful recording, but Audible is horribly clunky
Reviewed in the United States on July 27, 2019
Verified Purchase
This is an excellent recording of the Bible. David Suchet’s reading is superior to almost other Bible audio you can find. However, the Audible app is very frustrating. On my phone the app shows chapters 1-260 – no book names and no breaks between books.

Richard Ellingsworth
2.0 out of 5 stars Lacks Book and Chapter Breaks
Reviewed in the United States on January 28, 2013
If this was not a Bible, it would probably be a 5-star review. But this recording of the Bible is broken into 37 files where each file can contain one or more books of the Bible with no way to navigate from one to the other. For example, one file contains Hebrews and James but no way to find a particular chapter in Hebrews or the start of James without listening from the beginning. That may work great for a typical book but is not so useful for a book like the Bible where you want to be able to pinpoint the chapter you want to hear. If I have missed it and there is a way to separate the books and chapters, I would be very grateful for instructions.
21 people found this helpful

Before closing, I should add that part of the problem may lie with the smartphone App developers (since McLean’s version shows chapters on a laptop, proving the metadata is there). Another part of the problem with the entity that oversees the segmenting and indexing of the audio files themselves.

Finally, I did try to communicate the problem of the Listener’s Bible with Audible. Audible’s corporate headquarters are in City002 (Newark, NJ). I am omitting the silly correspondence for the sake of brevity, but it was like trying to describe a third dimension to a piece of paper.

Remember, chapter 892! But if you want to start at the beginning of Jonah, you must go to Part 9, starting at chapter 793, scroll down for a while, and find Chapter 890—Yes, you start Part 9 2/3rds the way through Jeremiah, pass through a heap of books including Obadiah, but then you have found Jonah, Chapter 1 at Chapter 890. Now you’ve arrived and can start throwing manufacturers overboard!

It is my plea with those who make and distribute digital versions of the Bible to make sure the names of the books of the Bible and the chapter numbers are displayed on all devices, so that readers/listeners can focus on the Bible and not the bad tech.